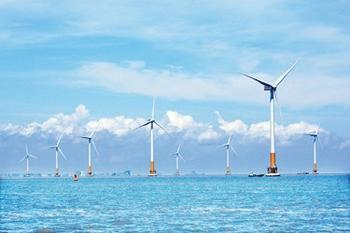 As an important content of strategic emerging industries and a technical commanding point for the development of wind power industry, China's offshore wind power is currently at a critical stage of demonstration projects to scale development. It needs to break through bottlenecks such as planning and layout, pricing policies, and transmission and distribution network construction. This is the message from the "2013 Shanghai International Offshore Wind Power and Wind Power Industry Chain Conference and Exhibition" concluded here on the 21st.

Accelerating preparations for coastal provinces On February 16 this year, the National Development and Reform Commission issued the "Decision on Revising the "Guidelines for Industrial Structure Adjustment (2011 Version)>". Among them, "Offshore Wind Turbine Technology Development and Equipment Manufacturing" was added as an encouragement project.

Although the development prospects of the offshore wind power industry are unquestionable, the actual situation is not optimistic.

According to Shi Pengfei, deputy director of the Wind Energy Professional Committee of the China Renewable Energy Society, although the offshore wind ionization load center is near, the technical threshold and cost are relatively high, and the investment cost is currently more than twice that of onshore wind power. The ongoing development of distributed photovoltaic generation costs is another new challenge for offshore wind power. â€œIf the on-grid tariff of offshore wind power cannot be lower than the 'market red line', it will be difficult to develop on a large scale.â€

It is understood that the current period of offshore demonstration and approval of offshore wind power projects, the passage of marine environmental assessments, and navigational safety verification generally takes more than two years.

Yi Yuechun believes that the evaluation of offshore wind energy resources in China has not yet been carried out systematically. Marine hydrological surveys and submarine geological surveys are also weak. These basic working conditions are arduous and have a long period. The slow progress of construction will inevitably affect the construction of offshore wind power projects. Smooth progress.

â€œEven if the current 3.95-million-kw offshore wind power project that the country has approved for its previous work will be completed by 2015, it will be very difficult to achieve the goal of building a 5-million-kilowatt offshore wind power in the 12th Five-Year Plan period,â€ said Yi Yuechun.

In 2007, China's first offshore wind turbine was put into operation in the Bohai Offshore Wind Power Demonstration Project and entered into an independent oil grid.

In June 2010, the first large-scale offshore wind farm in China, the Shanghai Donghai Bridge 102,000-kilowatt offshore wind demonstration project was successfully connected to the grid. In September of that year, the first batch of offshore wind power concession projects in China was organized by the National Energy Administration to complete the tender and four offshore concession bidding projects were completed in Jiangsu Binhai, Sheyang, Dongtai and Dafeng with a total scale of 1 million kilowatts.

Yi Yuechun believes that although the threshold and cost of offshore wind power technologies are still relatively high, they have higher efficiency in power generation efficiency and are of great value for development as a whole.

According to the "Twelfth Five-Year Plan", by 2015, China's offshore wind power capacity is expected to reach 5 million kilowatts. By 2020, offshore wind power capacity will reach 30 million kilowatts. This means that China plans to surpass Europe's development of more than 20 years in the "Twelfth Five-Year" period with a minimum period of five years.

- Band Switch with G point check that will not appear unrecognizable code in the screen during turning.