With the rapid development of information technology and scientific and technological progress, in many modern centralized management systems, it is necessary to perform statistics, analysis, printing, alarming, etc. on the field data, and at the same time, real-time control of field devices is required to complete various operations. As an indispensable part of the control system, single-chip microcomputer has been widely used in various fields.

Since the RS 232C does not define the physical characteristics of the connector, various types of connectors of DB-25, DB-15 and DB-9 have appeared, and their pin definitions are also different. The commonly used connector interface diagram is shown in Figure 1. The pin functions of DB9 are shown in Table 1. 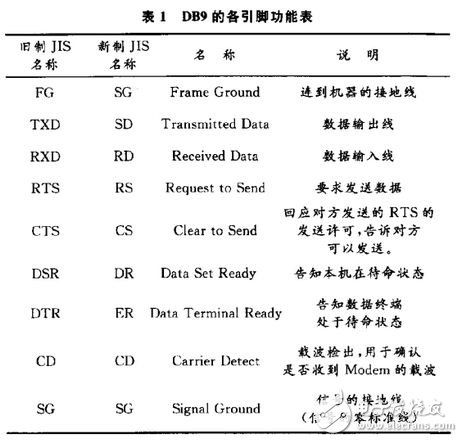 The RS 232C standard interface has 25 lines, which are 4 data lines, 11 control lines, 3 timing lines, 7 spare and undefined lines, and only 9 are commonly used. They are:

Data Set Ready (DSR): A valid (ON) state indicating that the data communication device is available.

Data Terminal Ready (DTR): A valid (ON) state indicating that the data terminal equipment is available.

These two signals are sometimes connected to the power supply and are immediately active when powered up.

The two device status signals are valid, only indicating that the device itself is available, and does not indicate that the communication link can start communication. Whether or not communication can be started is determined by the following control signals.

Clear to Send (CTS): A response signal to the RTS. When the DCE is ready to receive data from the DTE, the signal is asserted and the DTE is notified to begin transmitting data.

The RTS/CTS request response contact signal is used for switching between the transmission mode and the reception mode in the half-duplex MODEM system. In a full-duplex system, because the bidirectional channel is configured, the RTS/CTS contact signal is not required to make it high.

Transmitted Data (TXD): The DTE sends data to the DCE.

Received Data (RXD): The DCE sends data to the DTE.

Carrier DetecTIon (CD): Used to indicate that the DCE has been connected to the communication link, informing the DTE that it is ready to receive data.

Ringing indication (Ringlng, RI): When the DCE receives the ringing call signal sent by the switching station, it makes the signal valid (ON state), notifies the DTE that it has been called.

In a typical application system, information is often transferred between the CPU and the I/O device. Both are DTE, the communication between the host computer and the single-chip microcomputer 89C52, both sides can send and receive, and their connection only needs to use three. The line can be, that is, RXD, TXD and GND. This connection mode, that is, when two serial ports are connected, the receiving data pins are connected with the transmitting data pins, and cross each other, and the signal ground corresponding to the ground. The connection method is shown in Figure 2.

On TXD and RXD:

On the control lines of RTS, CTS, DSR, DTR and DCD:

It can be seen from the above definition that the level of signal inefficiency is lower than -3 V, that is, when the absolute value of the transmission level is greater than 3 V, the circuit can be effectively checked out, between -3 and +3 V. The voltage is meaningless. Voltages below -1 5 V or above +15 V are also considered meaningless. Therefore, in actual operation, the absolute value of the level should be between 3 and 15 V. When the computer communicates with the TTL level device, the RS 232/TTL level conversion device is required when the above computer communicates with the MCU. The MAX232 is commonly used.

1.5 RS 232 and the interface circuit between the microcontroller MAX232

Since the level of the RS 232 signal does not match the level of the serial port signal of the microcontroller, level shifting between the two must be performed. The MAX232 is powered by a single +5 V supply. It can be level-shifted with only five high-precision 10Î¼F/50 V tantalum capacitors. The converted serial signal TXD and RXD are directly connected to the serial port of the host computer. The internal structure of the MAX232 chip can be basically divided into three parts: 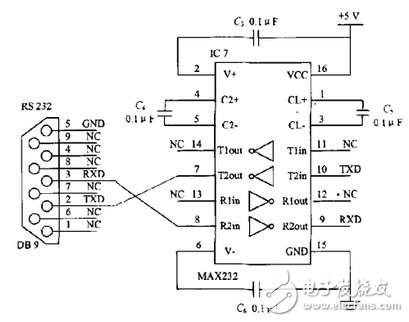 (2) The transmission rate is low, and the maximum rate is 19 200 b in asynchronous transmission.

In view of the above problem that RS 232 is easy to generate common mode interference, the common solution is mainly to use optical isolators, which pass through an isolated barrier to transmit signals. An optical isolator consists of a light-sensitive diode coupled by a photoresistor. The current flowing through the LED causes it to release energy in either visible or infrared light. This energy turns this photoresistor on, resulting in a low impedance between the emitter and collector of this resistor. The base of this LED can be left unconnected. Adding a resistor from the base to the emitter results in a faster switching speed but lower output current.

RS 232 serial communication is the hub of information transmission between PC and MCU. All data and command transmission must be completed by RS 232 serial port. After improving the shortcomings of RS 232, RS 232 enables efficient communication between PC and MCU, and uses level conversion chip MAX232 to realize mutual conversion between TTL logic level and RS 232 level. The serial signal TXD and RXD are directly connected to the serial port of the PC. This connection can not only reflect the flexible control function of the single-chip microcomputer, but also exert the powerful calculation and display functions of the PC, which is beneficial to the real-time acquisition and processing of the live signal. And monitoring to ensure a good human-machine interface interactivity.