The research team led by Gu Zeming, a professor of physics and engineering at the University of Tokyo's Department of Optical Systems, announced that he has successfully integrated optical circuits that play an important role in the "quantum teleportaTIon" of light into silicon chips. It can be said that this has taken a big step toward the quantum computer that realizes the quantum gate method.

Quantum teleportation is a method of remotely transmitting a state of a plurality of quantum states using quantum entanglement states. Because it looks like a quantum state moves instantaneously, it is called a teleportation.

In the past, Guze's research team used more than 500 optical components such as lasers, lenses and mirrors to form a quantum teleportation optical loop. The optical circuit covers an area of â€‹â€‹about 4.2 m & TImes; about 1.5 m (about 6.3 m 2 ). 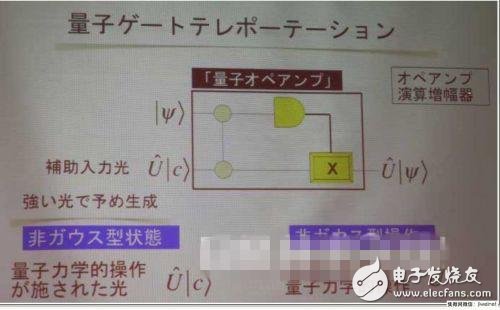 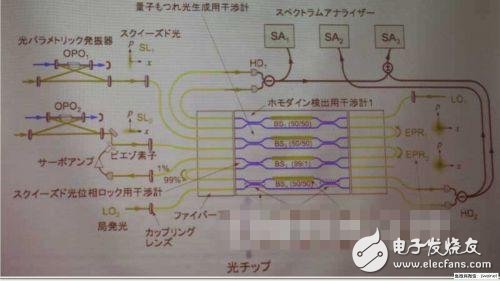 This time, the team integrated the interferometer section (about 1 m2) used to generate and detect quantum entanglement in this optical circuit of approximately 6.3 m2 onto a 26 mm & TImes; 4 mm silicon chip. It is integrated using NTT's PLC (planar lightwave circuit) technology. The substrate is a silicon substrate, and the optical waveguide is composed of SiO2. The laser uses light with a wavelength of 860 nm that can be captured by a silicon receiver with high sensitivity.

Guze pointed out that "the original interferometer used nearly 100 optical components." After integration, it became an IC consisting of only 4 to 5 Mach-Zehnder (MZ) jammers. The pre-integration interferometer uses nearly 100 optics because many mirrors are required for bending the laser in a desired direction and subtly changing the optical path. In the PLC technology, the curved light is realized by bending the optical waveguide, so that no mirror or the like is required, and the structure becomes very simple.

The MZ interferometer using PLC is not a new technology. This technology has been adopted in the field of optical switches and the like used for long-distance communication. There are even cases where thousands of MZ interferometers are integrated on the chip. Therefore, this is of epoch-making significance because the original quantum entanglement generation and detection can only be realized by a system composed of optical components, and now even if the related functions are integrated into the IC. "Do not try to know whether the coherence of the laser can be retained after passing through the PLC waveguide and the MZ interferometer" (Guze).

In the past, other research groups have tried integration several times. But it is not very successful. "This time the quantum entanglement was first observed with the PLC technology of the world's highest level of NTT" (Guze).

Will become a powerful technology for quantum gate quantum computers

The success of this ICization has the potential to enable quantum-gate quantum computers that use light as qubits earlier than systems that use other physical qubits.

It has long been found in the industry that light as a qubit of quantum computers is much more stable than other physical components. â€œThe energy of other physical components is very small, and there is not much difference from the ambient temperature, so it is very susceptible to environmental noise. Therefore, it needs to be cooled at very low temperatures. The light energy is much higher than the ambient temperature, and it is basically not at room temperature. Environmental noise impact" (Guze).

The only and biggest drawback is that the optical loop is difficult to integrate. This time, it was confirmed that the optical circuit can be integrated into the IC, which eliminates a major obstacle to the realization of quantum computers.

The remaining problem is to improve the quality of qubits by reducing the optical loss. In fact, the observed quantum entanglement state is still far from ideal. Because "photons are lost with the loss in the fiber and the coupling loss between the fiber and the chip, only 50% left" (Guzawa). It is estimated that it is expected to be greatly improved by replacing the optical fiber portion with the optical waveguide of the PLC as much as possible. Guze pointed out that "if the loss of (the entire quantum operational amplifier) â€‹â€‹can be reduced to less than 50%, in principle, quantum error correction technology can be realized, and the quantum computer can be operated."

PufangTech`s UHF Radio Modem operates in 403~433MHz, 419~440MHz, 450~480MHz and 480~512MHz frequency band. These radio modems have air data rate of 19200bps in 25kHz channel spacing and 9600bps in 12.5kHz. These UHF radio modems work in transparent transmission, and they can ensure compatibility to most user systems and protocols. You can also change the settings in the programming mode with a Windows based program on PC.

Wide band radios can run and be achieved with higher frequencies over 1GHZ, however, this is not likely to meet the standard of range and reliability as a wide band link.