Infrared touch screen full name: infrared technology touch screen (Infrared Touch Screen Technology), by the integrated circuit in the touch screen frame, infrared emission and receiving light-emitting diode components, in the screen surface, the formation of X, Y axis infrared cross detection network, any The opaque objects block the transmission and reception of the infrared LED tube, and are monitored by the IC master control IC, and the computation data is fed back to the computer. The computer then processes the data to locate the blocked infrared position, thereby realizing touch and write. operating.

The implementation principle of the infrared touch screen is similar to that of the surface acoustic wave touch, and it uses infrared emitting and receiving sensing elements. These components form an infrared detection network on the surface of the screen, and touch-operated objects (such as a finger) can change the infrared of the electric shock, and are then converted into the coordinates of the touch to achieve the response of the operation. In the infrared touch screen, the circuit board devices arranged on the four sides of the screen include an infrared emitting tube and an infrared receiving tube, and correspondingly form an infrared matrix that intersects horizontally and vertically.

The infrared touch screen is an electronic device that detects and locates a person's touch gesture using an infrared matrix densely arranged in the X and Y directions. Infrared touch screen in front of the display to install a circuit board frame, the circuit board arranged on the four sides of the screen infrared emission tube and infrared receiver tube, one by one corresponding to the formation of horizontal and vertical cross-infrared matrix, as shown in the schematic. When the finger touches the screen, it will block two infrared rays passing through the position, and thus can determine the coordinate position of the touch point on the screen. Any non-transparent object can change the infrared rays on the contacts to achieve touch screen operation. When there is a touch, fingers or other objects will block the horizontal and vertical infrared rays passing through the position. When the touch screen scans and believes that there is a blocked infrared ray, the red light is on, indicating that the infrared ray is blocked, there may be a touch, and immediately change to another The coordinates are re-scanned. If another axis is found, there is also an infrared blocker. The yellow light is on, indicating that the touch is detected, and the two detected infrared blocking positions are reported to the host computer. After calculation, the position of the touch point on the screen is determined.

Infrared touch screen products are divided into external and built-in two. The plug-in installation method is very simple, it is the most convenient installation in all touch screens, as long as the frame is fixed in front of the monitor with glue or double-sided adhesive. 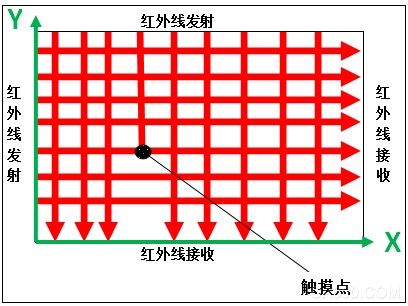 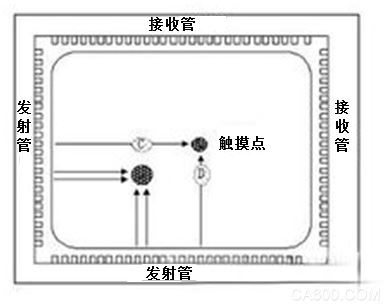 The advantage of an infrared touch screen is that it can be touched with a finger, a pen, or any object that blocks light. The disadvantage of the infrared touch screen is that it does not feel good when used on a spherical display. This is because the infrared grating matrix on which it works is obviously required to be on the same plane. Therefore, the working plane of the real touch screen has a larger distance from the curved display screen. Intervals, especially at corners, but this disadvantage does not exist on flat displays such as liquid crystal displays.

It can be said that the use of a flat panel display, infrared touch screen has considerable advantages. Infrared detection technology using the same wavelength of infrared emission tube, infrared receiver tube (referred to as infrared tube) can get a simple infrared detection method:

As long as there is an object blocking the connection between the infrared pair of tubes, the received signal will drop sharply, so the infrared can detect the obstruction of the object and is widely used in systems such as anti-theft systems, automatic sensing systems, and counters.

If the infrared is a short-range application, the degree of blocking can be detected based on the degree of attenuation of the received signal. This is the so-called analog method. The analog mode uses a dense array of receiving tubes at the receiving end and can also be used for contrast imaging; in order to prevent interference, infrared detection also prevents The pulse mode can be adopted, that is, the infrared transmitting tube emits a fixed frequency signal, and the receiving party only detects this frequency, and the pulse mode has very strong anti-interference capability. The pulse method can also be used for digital communication if it modulates the signal at the operating frequency. This is the famous infrared communication, the remote control of household appliances, the infrared communication of the computer, and even the fastest optical fiber communication today. Infrared communication has no influence on the human body, and has a short launch distance and no space pollution. It is highly favored today.

2. High transmissivity without intermediate medium, up to 100%;

4. The use of features is good, no need for touch, no special requirements on the touch body;

5. Support true multipoint on WIN7 or above

8. Operating system compatibility is good WinXP/VISTA/Win7 or above, android;

10. Under normal circumstances will not be strong infrared interference, such as remote control, sunlight or incandescent infrared sources such as infrared receivers;

Ambient light factor, the infrared receiver tube has the working range between the minimum sensitivity and the maximum illumination, but the touch screen product can not limit the scope of use, from the dark song hall private room to the outdoor use in high-intensity sunlight in Hainan Island, as a product, it must adapt.

Around the reflection, refraction, interference, infrared emission tube has an emission angle, the receiving tube has a wide range of receiving angle, if the surrounding reflection to a certain extent, you will find where the finger can not block the signal.

To solve these problems, the biggest advantage of choosing the analog mode is that it can analyze and improve the resolution of the touch screen, but the anti-interference ability is not comparable to the pulse mode. Although the pulse mode has strong anti-interference ability, the pulsed mode needs a response process at the receiver. The problem of time, but the touch screen requires a very fast speed, so in the adaptive circuit, microcontroller software, mold design, selection of light transmissive materials, there are several technical breakthroughs.

Infrared screen to work is the infrared matrix, the matrix multi-point x, y coordinates can be combined square multiple of the touch point, see below, A, B two points and C, D two points is the same for the infrared screen The effect is indistinguishable from its treatment method. The common treatment of multi-touch on the infrared screen in the market is continuous or not, whether it is continuous or not, or it is judged as the upper left corner, that is, whether A, B or C, D are shown in the figure below. Judging as point C. The real technical hard-working infrared screen should be a multi-touch continuous judgment on the coordinate, ie, a point judged as a touch of a large object (such as a thick finger), and it cannot be judged on a discontinuous multi-touch. The technology is excellent in that this algorithm imposes stricter requirements on product quality and does not allow for a variety of fault conditions.

The capacitive touch screen itself is actually a set of precise leakage sensors, which cannot be touched by a gloved hand. Due to the use of a capacitive method, drift is caused.

Ultrasonic touch screens have surface acoustic wave touch screens. Electro-acoustic piezoelectric transducers are used as sensors. The piezoelectric crystals used for receiving sensors and transmitting sensors are not a model, and doping materials are slightly different during manufacture. The power of the resonator is large, and the receiving transducer is more sensitive. Piezoelectric transducers have long life, stable operation, and normal operation can guarantee 10 years without problems. After the touch screen is installed, the transducer is hidden, but care must be taken during transportation and installation. The exposed transducer crystal cannot impact the extrusion. The surface acoustic wave touch screen has two pairs of X and Y axis sensors. The surface acoustic surface wave of the screen is used to detect the finger touch. It can be said that the work surface is a layer of invisible, unbreakable acoustic energy. However, the disadvantages of surface acoustic waves are: This technology was originally designed for smaller screen sizes, so it is inconvenient for screen sizes larger than 30 inches. Because this technology cannot be packaged and is easily damaged by surface contamination and moisture, it is not suitable for many industrial and commercial applications. Dirty surfaces can cause dark spots on the screen, requiring regular cleaning of the sensor and irregular adjustments. Based on the mode of operation of the technology itself, it is also difficult to avoid unnecessary interference, such as the interference of external sounds.

The fifth-generation infrared touch technology introduced in recent years not only increases the resolution to 4096*4096, but also improves the anti-glare interference performance to the direct sunlight environment. More importantly, it has an essential aspect in terms of product life and maintenance-free performance. leap. The fifth-generation infrared touch adopts the guiding principle of redundant distribution of probability function devices, and the lifetime is more than 7 years under the working environment. This means that when the matching display reaches the end of its life, the touch screen itself is still working.

The improvement in the performance indicators of the fifth-generation infrared touch screen is enough to push the application of touch screens to a new level. The original can not be used in some occasions can be used. For example, in the past, when the touch screen traced the trajectory of the finger movement, many broken pens would appear and could not be used for Chinese character recognition. When the fifth-generation touch screen traces the trajectory of the finger, the accuracy, smoothness, and tracking speed can all meet the requirements. The user's writing can be smoothly converted into image trajectories, fully supporting handwriting recognition input.

The sixth-generation touch screen has been adapted to the requirements of the windows 7 system or above, and supports the Android system platform, which supports multi-touch.

- Not afraid of water and pollution

- New easy to use, suitable for short-term products

- Transmitting transducer is fragile and there is a repair rate

- External or built-in, does not affect the appearance of the monitor, can adapt to small to large screen

- May be disturbed by high intensity light

Infrared sensing touch screens are suitable for a variety of non-open-air applications where unknown objects are used. The sensing medium of the infrared touch screen is anything that can block light, such as fingers, penholders, sticks, and the like. 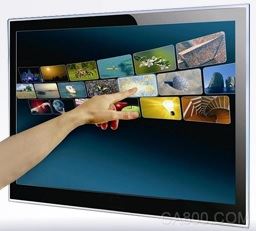 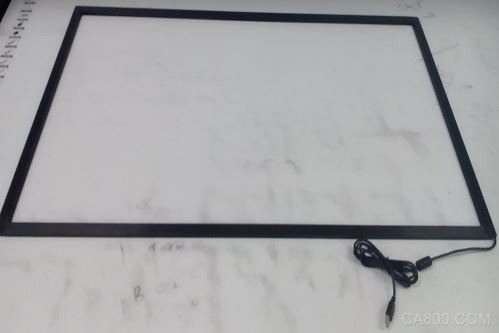