Have you ever tried to open the cap or envelope with one hand? Or something else that needs to be done with two hands? Now, if you wear a new machine wrist developed by the Massachusetts Institute of Technology (MIT), it's a breeze to do it with one hand. Although this wearable robot is still in the prototype stage, it has established a new paradigm for assisted robotics with "synergism".

â€œIt is well known that human hand movements are controlled by synergy between the organisms â€“ this is the concept that muscle groups are activated via a single control signal,â€ said Dr. May, MIT Dr. Faye Wu. â€œWe want to extend the concept of this collaborative control. To the research of wearable robots." 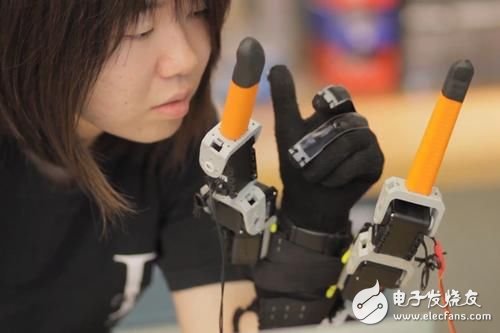 According to Faye Wu, a Ph.D. candidate, the two mechanical fingers near the thumb and the little finger can assist the user with one hand to complete a task that usually requires two hands.

To this end, the wearable wrist robot is equipped with a pair of gloves that measure the angle and direction of each finger and then transmit control signals to other fingers for a coordinated reaction. For example, when grabbing a large object, the average finger simply grabs the top and allows the longer robotic finger to grasp the bottom.

Asada's research team is developing new collaborative algorithms that allow additional robotic accessories to assist tasks that are difficult to accomplish with one hand, and in the future, may further assist humans to successfully complete work that is difficult to accomplish with both hands or arms. In addition, there is no need to give these robots clear instructions, it can cooperate with the human finger in the way, with the action of the finger and the need to grab the object together. 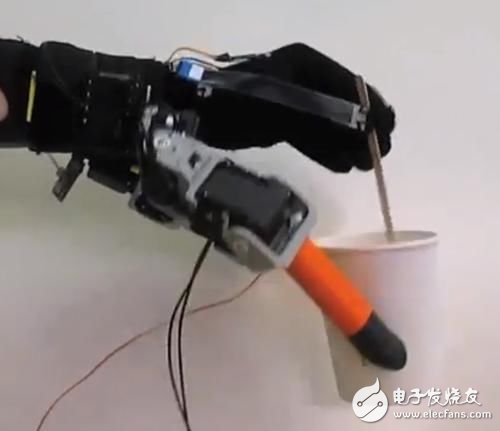 If the machine fingers help hold the cup, people can easily mix the drink with one hand.

MIT refers to this extra machine finger as a â€œtwinâ€ finger because they are made up of actuators that are connected together and exert the same strength as human fingers. By exploring the way humans grab objects, the researchers found that this synergy of the fingers requires only two basic algorithmsâ€”to bring the fingers together and to bend inward. Most object grabbing actions are just a combination of these two basic modes.

Researchers hope that these basic patterns also apply to other organisms to play a "bio-machine" synergy, but the researchers' next step is to add momentum to the combination. For example, how do you let the robot's fingers know that more force is needed to pick up a heavy or smooth little object? Secondly, different people have different ways to grasp the objects and methods. Therefore, the tool library must be compiled for different skills, so that the robot can select the correct algorithm from the tool library for the assisting object, learn to identify and more effectively Help.

The research team is also working to reduce the finger mechanism of the machine so that it can be built into the bracelet, and when necessary, pop out extra fingers to help, and then fold it properly when not in use.